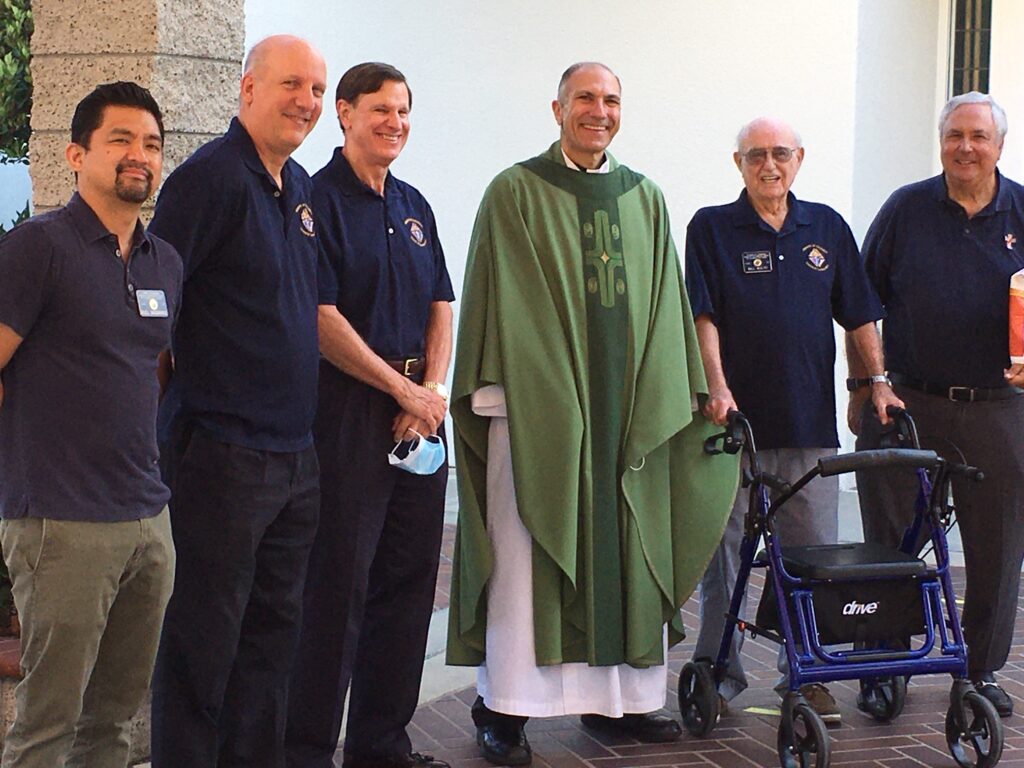 Council of the Rock 15065 celebrating its 10th anniversary at Saint Elizabeth Ann Seaton (SEAS) Church in Irvine CA, not even a 40 year old parish itself, had its first Brother Knight ordained a priest by the Bishop of Dioceses of Orange.  Fr. Mike Rizzo was ordained June 6th and celebrated for the first time at SEAS on June 27, 2020.  Not too shabby for a council of under 60 Knights.

Okay our council is floating on a spiritual high, while it was way of Christ that Fr. Rizzo has taken to get us there.

Mike Rizzo practiced law and was married and raised a son. The couple moved into our parish neighborhood, where Mike began the effort of being ordained a Deacon.  His wife passed away from cancer that first year they moved here.  God, being all mysterious, moved Mike’s heart through years of seminary and Deaconate work in other parishes in Orange county, but was still our Council Knight!  He’ll be on our Council’s Membership for life and we don’t have to cover his annual dues to boot! (that’s KOC bylaw, become a catholic priest and we’ll not charge you dues anymore).

If you saw the Ordination ceremony this year, you’d say Mike is a bandit who stole God’s heart. He and 3 others ordained wore masks, heck the very limited audience had to wear masks too. None of us could attend either. (let it be known we Knights of our Council don’t like COVID). The pic you see of some us and Mike was taken after Mass June 27th, and for the record we dared to take off our masks and held our breaths for the entire time. Thats our story and we’re sticking with it.  All in the pic are alive and well over 40 days and nights since this pic was taken.

Mike is serving his first assignment at St. Simon and Jude in Huntington Beach, CA, covering for the Order of Franciscans who’s left that parish after 118 years service; due to their own lack of friar priests, but those Franciscans really rather serve the poor, which HB was at its start, I think the rest of the nation has heard of Surf City by now…not so poor anymore.

Council of the Rock Director of Vocations